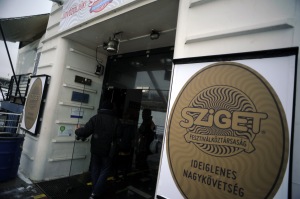 Having covered the majority of UK festivals worth checking out, it’s high time I started looking at European festivals. Of course there are hundreds of festivals popping up all over Europe so after a fair amount of research I”ve narrowed it down to ten, kicking off with Hungary’s Sziget Festival. Sziget Festival has been around for a while, since 1993 in fact, and continues to set the benchmark as one of Europe’s largest music festivals. What sets it apart from a lot of festivals is that it’s a week long, featuring over 1000 performances each year, as well as that, along with the likes of Glastonbury, the music is such a small part of it, as such I won’t just be looking at the lineup like I’ve previously done in my festival previews.

Lineup
Single handedly the best lineup I’ve ever seen at a festival. I don’t even know where to begin, Blink182, Outkast, Macklemore & Ryan Lewis, Skrillex, Deadmau5, Queens of The Stone Age, Imagine Dragons, The Prodigy and Calvin Harris are a mere slither in the extensive lineup at 2014’s festival. Fans of any genre has more than enough to sample in the Hungarian sun.

Location
Dubbed ‘The Island of Freedom’, Sziget is situated on an island located in the capital of Hungary- Budapest. It manages to reel in well over 400 000 festival-goers from over 70 countries and given the climate, scorching sun and beaches as well as the live musical performances, it’s more of a holiday/festival hybrid as apposed to just a standard weekend of music.

Attractions
Having previously touched upon, Sziget is way more than just a load of gigs. In one corner of the island is the massively popular Sziget Beach, featuring deck chairs and a bar, it’s a more than perfect way to relax or take a break from the music if you need it. Much like Coachella, Sziget has its own ferris feel named the Sziget Eye in which giving you an aerial view of not only the festival but the beautiful city of Budapest. As well as this, straight out of the UK’s Nottingham comes the AMOCOCO, ‘an 800 metre inflatable sculpture made up of labyrinthine tunnels and inspiring spacious domes – a sensual world of liquid-light and colour’. Of course then comes a plethora of artistic performances beyond music including acrobatics, dancing and acting as well as a vast array of parties including paint parties, balloon parties and bubble parties.

Nothing I can say can really give Sziget the justice is deserves, the lineup alone is enough to dip into your savings and splash out on the incredible festival, but it’s way more than that. The integration of a beach, the fusion of the arts and attractions, the constant appreciation and omnipresent references to colour, life and nature make it the festival to beat. If all this doesn’t convince you to part with your cash, watch the 2013 Aftermovie below: