Sunday was the best day in terms of anticipation, all of my favourite acts fell on Sunday which was both brilliant and terrible at the same time- they pretty much all clashed with each other. But one thing I think the entirety of Glastonbury was waiting for was 4:20, when the Queen herself- Mrs Dolly Parton was set to grace the Pyramid Stage.

The 1975 were the first act I watched on Sunday, and they were alright. Their Pyramid Stage status puzzles me, there’s much more bigger bands at Glastonbury, with more of a catalogue of music, as well as just being generally better, but either way they trundled through their hits and on the whole they were, as I said- alright. I really wanted to see Sam Smith over on The Other Stage, but with Dolly set to follow The 1975 and the crowd growing and growing, I made the safe bet to stick with The Pyramid Stage and give Sam a miss. Come 4oclock, twenty minutes before Parton was set to perform, the crowd was the biggest I’d ever seen, and expanded to every corner of the field, it was completely packed out and it seemed everybody had come to see her set.

She pranced onto the stage five minutes early, sporting a glittery white/silver dress and immaculate hair, she was gleaming all over, and genuinely looked like she was on top of the world. She kicked off her set with a few of her well-known songs including Jolene which had the crowd understandably rocking. I, as well as most of the crowd, didn’t know about 60-70% of her songs but either way, we were all jiving and singing along to each track as best we could. A clever addition to Dolly’s setlist was a song [presumably] entitled Mud, a song she told us she’d written on the way to Glastonbury once she’d seen the rain, it was a subtle nod to Glastonbury’s roots, as well as appreciation to the crowd that had braved the elements to see her. As you’d imagine, her trademark 9 to 5, as well as Islands In The Stream were crowd favourites, but it was her general showmanship and charm which really won us all over. She told us all a story about most of her songs, often hilarious ones, for example in one she said how herself and her siblings ‘were nothing more than a bunch of horny hillbillies’ to which she shrieked with adorable laughter. She closed the set with an incredible performance of Lay Your Hands On Me alongside Bon Jovi guitarist, Richie Sambora, as well as a subtle rendition of I Will Always Love You. Dolly would certainly be hard to top.

Sunday evening came around, and this was where the clashes reached their absolute peak of frustration for me. The Black Keys, Ellie Goulding, The Beat, Matrix & Futurebound, Chance The Rapper, Sigma, James Blake, Pretty Lights, Disclosure, Massive Attack and Wilkinson were all subject to clashes if you can believe that, it’s all well and good having a lineup as good as Glastonbury, but when you can’t watch half of them, it’s just fucking frustrating. In the end, I decided to watch the majority of The Black Keys, a bulk of Chance The Rapper and then high-tail it over to watch Disclosure (I’m so sorry Ellie).

The Black Keys were odd performers, they lacked charisma as well as audience interaction, and merely churned through their extensive catalogue, with only an introduction or a ‘thank you Glastonbury’ to note, they also took huge pauses between songs so that Auerbach could swap guitars. However, they’re two of the most innately talented musicians I’ve ever had the pleasure of seeing, they didn’t need to do anything else other than perform there songs as-is, they truly encapsulated the less-is-more way of thinking. I remember standing there thinking, on numerous occasions, ‘how on earth is he making that noise come out of that guitar?’, Auerbach is truly one of the most underrated guitarists in music right now. What’s more is that they played my favourite Black Keys song- Gotta Get Away, in which I seemed to be the only who knew it, which of course, was fine with me. 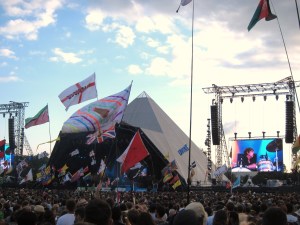 Next up was Chance The Rapper, who I couldn’t justify in one or two paragraphs, I’ve written a full article on his Glastonbury performance which you can read here. After Chance, was one of the most exciting duos in music, let alone electro/house or whatever- Disclosure. We arrived on scene at The West Holts Stage just in time, they’d began their opening track- F for You, playing the original, then the Mary J Blige featured rework, unfortunately she didn’t grace the stage but it was still a great way to kick off their set. They played almost the entirety of Settle, with all the best tracks including Confess To Me and Voices making appearances, they brought an array of guest vocalists including Ed MacFarlane, Aluna Francis, Eliza Doolittle (who I love and basically lost my head when she came out) and of course Sam Smith for a suitable, and somewhat expected finale- in the form of Latch.

Glastonbury went out with a bang, having saved the best until last, Sunday well and truly blew me away. With near flawless performances from Chance, Dolly, Disclosure and The Black Keys, it really was the most incredible way to end such an amazing weekend- one that I’ll remember for the rest of my life.