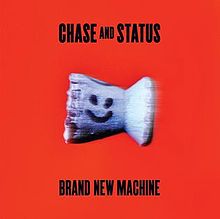 Chase & Status kicked off their career with drum and bass, all the while flirting will elements such as garage and dubstep, they then made a more mainstream move with No Idols, recruiting a plethora of guests for their sophomore, and now we’re at album three- Brand New Machine. Brand New Machine’s lead singles were all massively popular- Lost & Not Found, Count On Me and Alive all charted within the top twenty, with the latter of which being the only one to not reach the top ten, and as you might expect the album itself did well commercially and also came in at number two.

Brand New Machine is a strange one. One the one hand, you have one half of terrible filler ‘beats’ which I can’t even call songs, yet on the other side of the coin are some of Chase & Status’ best material to date. Tracks 1-5 (excluding Count On Me) are simply put- awful, particularly the Major Lazer collaboration, the songs go nowhere, have no [proper] vocals, drops or tunes to them and possess nothing but a minimalist beat featuring strange african ad-libs, I think Chase & Status should leave the whole Diplo-thing to Diplo himself.

Beyond this horrendous opening, things start to improve. The duo enlist two great MCs in Pusha T and Knytro for Machine Gun and Gangsta Boogie respectively, and they spit some great bars on two very contrasting tracks- the former features heavy drums and a colossal drop that is begging for club-use, where as the latter still possesses that Chase & Status fire, yet leaves the bulk of the track up to the guest vocalist, who takes a great stab at it. Then we come to some of Chase & Status’ strongest songs they’ve ever made, Heaven Knows featuring Elli Ingram screams Massive Attack and also shows that trip-hop may be a genre the duo are also capable of tackling- as if there wasn’t enough they’d already mastered. Lead single Lost & Not Found is my personal favourite and again goes another direction, this time classical strings and a progressive bassline are utilised to create another sound contrasting to the deflated opening. Track ten- Like That, nods towards the likes found on No Idols, just with a bit more invention, the backing strings found on track nine again make a welcome appearance, and what results is another one of the standout tracks from Brand New Machine.

Chase & Status continue to challenge themselves, they continue to push their own boundaries and try out an array of styles. This time around it’s hard to say wether it’s a success or not, which is why it’s a perfect segway to their next album, it’s a step forward in the right direction, like a trial and error. The classical strings, the trip-hop, omnipresent electric guitar, and utilisation of guest vocalists, particularly rappers, are all things to take away as more than a considerable success. Moombahton should be never attempted again, and I hope Diplo isn’t around to tempt Chase & Status to take another stab at it, as well as this, minimalist beats that cry out for a drop or hook [or anything for that matter] such as Deeper Devotion and Gun Metal Grey can be left at home altogether, but when you look at Brand New Machine once it’s all over, you can see that it holds the key to even more success, as well as great music, from Chase & Status.