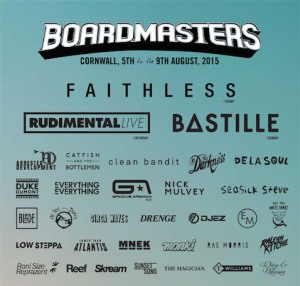 Some of the names set to perform at Boardmasters 2015

I was an inch away from buying a ticket to Boardmasters 2014, featuring headliners Chase & Status, Snoop Dogg and Bastille, as well as a plethora of well-renowend DJs such as Wilkinson, DJ EZ and Roni Size, I really regret not going, especially with how cheap the event is. However, Boardmasters is so much more than just a display of music, like NASS Festival, the event specialises in extreme sports and looks to bring them to the festival, thanks to its location on Fistral Beach in Cornwall, the South of England.

As you might imagine, being on a beach, the extreme sport on offer is of course surfing. Since 1981, Boardmasters has been a staple of the British surfing scene, starting off as a humble shindig of friends has quickly snowballed into one of the most important British surfing events on the calendar. Now featuring world-renowned names from he world of surfing including Jock Barnes and Angus Scotney, the festival is home to some of the biggest competitions in the country.

Of course this being a music website, it would be ‘contrapuntal’ of me to review a random surfing event, but besides the surfing, Boardmasters has also cemented itself as an integral part of the UK festival scene with just as much conviction and notoriety. With past performers including acts of Snoop Dogg, Dizzee Rascal and Fatboy Slim’s caliber, Boardmasters popularity can only go up. Set to perform at 2015’s event include headliners Rudimental, Bastille, and the legendary Faithless, who return after a five-year hiatus, marking their return to Cornwall, where they haven’t played in over 15 years.

Other high profile names at Boardmasters include the again, legendary Arrested Development, Groove Armada, The Darkness and De La Soul, as well as number of fresh faces such as Catfish and The Bottlemen and Clean Bandit. Duke Damont brings his sun-kissed house to Cornwall, as does MNEK with his R&B criss-crossing pop, with names like Circa Waves, Lower Than Atlantis and Drenge all their for the more ‘band-y’ among you.

Boardmasters is one of those festivals with that added injection of character; that something a little less straightforward than just a music stage. The lineup is exceptional, the location is even better, the surfing and other amenities on offer are just as exciting as the music, and what’s more, it’s cheap as chips- a weekend ticket with camping will set you back a measly £139. So what’s your excuse now?

Boardmasters runs from 5th-9th of August 2015, tickets can be purchase now from their website.