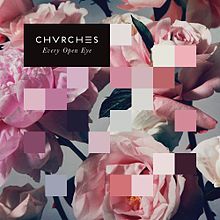 Back in 2013, a then-unknown Scottish trio known as CHVRCHES made themselves known via their incredible debut album The Bones of What You Believe. Fast forward two years, the trio have stayed pretty quiet, appreciating the success they’d achieved, touring and cementing themselves as a pop force to be reckoned with. CHVRCHES slid under the radar with their debut, managing to nab a couple of hits in the process (Recover, The Mother We Share), and oddly it’s like they’ve repeated the process with their sophomore. Refusing to [extensively] tour this summer, despite an album looming, as well as little-to-no public appearances on tv or radio, the promotion for Every Open Eye has been respectfully low-key.

Every Open Eye is generally happier and cheerier than The Bones Of What You Believe. It’s often noticeably lifting, and much more poppy; contrapuntal in comparison to its undisputed promotion and marketing. Lauren Mayberry’s voice is just as penetrating with that flicker of a Scottish accent there to be swooned at. Opener- Never Ending Circles is jaunty, while closer- Afterglow, is delicate and fragile, making it one of the album’s highlights. On the former, the trademark CHVRCHES sound continues to flourish, where as the latter shows a newer side to the three-peice, with gradual, proud synths replacing hard-hitting.

Every Open Eye is on a couple of occasions victim to the odd bore, with Make Them Gold offering little more than a segway to the We Sink-replicating Clearest Blue. But on the same train of thought, Down Side of Me again shows the aforementioned delicacy to CHVRCHES’ progression as a band. With their sophomore they dare to delve into more intricately crafted music, contrasting the punchy aura of The Bones of What You Believe. This ultimately encapsulates the general feel of Every Open Eye- it requires more of your attention, a little more of your time. And with that dash of perseverance, the result is on the most part rewarding.