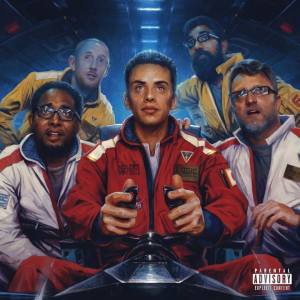 ‘Indie rap’, or ‘alternative rap’ is an undefined, confusing sub-genre of hip-hop, one that you really do need to take with a pinch of salt. Those that could slot into the patchwork of indie rap include the likes of Atmosphere, Childish Gambino, Jurassic 5, MF DOOM, Chance The Rapper and Aesop Rock, of course the correlating feature being that they’re all self-made and independent artists. Another of those names that belong to the genre is Logic. Despite seeing his name doing the rounds on the internet for the past few years, I’ve never got round to listening to anything from him until the release of his second album- The Incredible True Story.

The Incredible True Story is an impressive album. With most trend-hopping, trap-filled hip-hop releases of 2015 disappointing me, Logic is finally giving us a rap album with some substance. Taking form as a concept album, The Incredible True Story tells the story of a flight crew 100 years in the future searching for a rumoured planet called ‘Paradise’, following the eventual demise of Earth, leaving around 5million humans left aimlessly searching space. What this does is break up the album nicely, giving some hilarious skit-come-intros (White People), and some deeply philosophical skit-come-outros (The Incredible True Story).

‘Isn’t this Kanye West’s Amazing?‘ are my first thoughts upon sampling (if you’ll pardon the pun) Logic’s The Incredible True Story. Turns out it was in fact a direct sample, but this opener would pave the way for a lot of where the album’s influence comes from- 808s & Heartbreak. The other subtle nods at other rap figures are beautifully worked into the project with perfected subtlety- ‘two words Mos Def‘ reference on City of Stars, or the interpolation of Nas’ Life A Bitch on Innermission. Elements of trip hop, with nods at the likes of Massive Attack beam through on Paradise, and the electro influences continue with a sample from James Blake on Young Jesus.

Logic’s lyricism and overall rapping is impressive. The sombre isolation of City of Stars is the perfect platform to Logic to deliver one of the album’s most impressive moments, such as when recalling his relationship with Def Jam: ‘Much love to Def Jam, even though they under shipped me // Did me like Bobby did Whitney but the fans was with me // Know my name around the world but it still ain’t hit me // All the talent in the world and they still don’t get me // I didn’t talk about my race on the whole first album // But black vs white bullshit was the still the outcome’.

The Incredible True Story is an absolute must-listen. It’s an organic, authentic piece of music that’s refused to conform with today’s hip-hop. It possesses character, thought, concept, a story, and I really do have few complaints. Logic’s delivery is notably refined and comfortable, tackling an array of beats, switching up his flows with flawless continuity. His lyricism is also a talking point, with some excellent imagery and storytelling rap provoking thought and insight. A definite candidate for album of the year.

One thought on “[ALBUM REVIEW] Logic – The Incredible True Story”