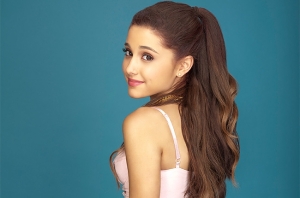 With One Direction recently caught smoking marijuana, [smoking the least criminalised drug when they’re billionaire pop stars? How could they!?] It’s time I took a look at just why the likes of 1D, Bieber, Ariana Grande, Selena Gomez and more are all so successful. It’s their genius branding – what parents want to see in their kids’ idols, the sweet girl or the good guy.

More specifically, let’s take a look at one of the newest addition to the category- Ariana Grande. Much like Selena Gomez among others, Grande’s career kicked off landing her first lead acting role in a Nickelodeon show, this time – Sam & Cat. Gradually Grande began to outshine her co-star- iCarly’s Jennette McCurdy, and soon she was lined up to release her solo major label debut. Throwing a degree of her childlike naivety away while still retaining her innocence, Grande released her debut single The Way, now this is where Grande and her team are nothing short of genius from a marketing point of view.

At first glance The Way is a cute poppy song with Ariana prancing about playing with balloons, gleaming and genuinely enjoying herself, it was music that immediately likeable, they was no swearing, vulgarity, [limited] sex appeal and no [abundantly clear] connotations of anything ‘risqué’. However, not all is as it seems, Mac Miller was given a guest spot on the track, giving The Way a bit more of an appeal to a broader audience, however Mac isn’t a huge guy, he’s not plastered in [visible] tattoos, spitting profanity or grabbing his privates, again coinciding with Ariana’s image of cute, yet possessing that air of something a bit less straightforward. Another subtle little aspect to The Way is in the song itself, the piano chords that drive the song forward is a sped up sample of Big Pun’s Still Not A Player, the hook to this song is ‘I Ain’t A Player, I Just Fuck A Lot’, which Mac Miller references in his opening verse . Again, this broadens her appeal subtly to rap fans, it gives her that added edge of uncertainty, yet it is so subtle that watchful parents don’t cotton on and stop their beloved offspring buying into her.

Over 150million views to The Way later, 15.4million Twitter followers later, and a number one debut album later, we have another musician fitting the ‘good girl’ branding. But this is where Ariana Grande differs from a lot of other manufactured stars, she’s genuinely talented! She has a beautiful voice capable of reaching near impossible notes which is as close to Mariah Carey’s earlier days as you can get. More to the point, while writing this article I’ve had her album playing – Yours Truly, and it’s really good, it received wide critical acclaim gaining 81/100 from Metacritic, and with due cause, it features cleverly devised music that makes more than the most of her ability. 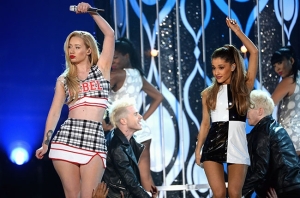 More recently, Grande secured another hit, this time in the form of Problem with Iggy Azalea which rose to number 2 on the US charts, she’s busy finishing her sophomore album and is showing no signs of slowing down. Problem is different to the likes found on Yours Truly which is even further key to her image and progression as an artist, her first album secured parents’ opinions of her, allowing them to invest in her music for their angel kids. But now, with the release of her second album, there’ s a bit more sex appeal, a bit more of a risk and with features from Iggy Azalea, it shows she’s now trying to secure even more of an audience, not that she needs it.

Leave a Reply to thewestreviewdotcom x