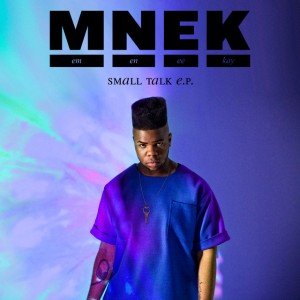 At the moment MNEK is probably best known for his collaborative work with hits like Ready For You Love, or some of his work with Rudimental. But what you may not know is that MNEK is already an established songwriter boasting credits on a plethora of exciting acts’ work, mainly British, including Bastille, Oliver Helens, Naughty Boy, Clean Bandit and Little Mix. While it’s clear that the guy obviously has a knack for songwriting, how would he fair on his own studio release, the first since his breakthrough?

As mentioned, a lot of MNEK’s talents have previously left him with just a name in the writing credits for other artists, with only a couple of occasions to flex is own vocal talents. But now, MNEK has enough room to manoeuvre with his own vocal ability, which are especially complimented with the obviously closely-monitored production. As you’d come to expect by now, the songwriting is also as memorable; ‘you’re a pool of desire, I just wanna drown’, found on the EP’s most memorable cut- the Bondax/Daft Punk/trip hop bridging In Your Clouds.

Small Talk EP is a smart little project. Featuring six songs of soul-charged pop, the EP also flirts with the idea of many different genres, from the house-inspired More Than A Miracle, to the gospel, a cappella-toting finale Suddenly. Small Talk has so many styles that are so effortlessly executed by MNEK. and come the end of this short project, you really do want more.

Like this review? To keep up to date with The West Review, head to our Twitter page.