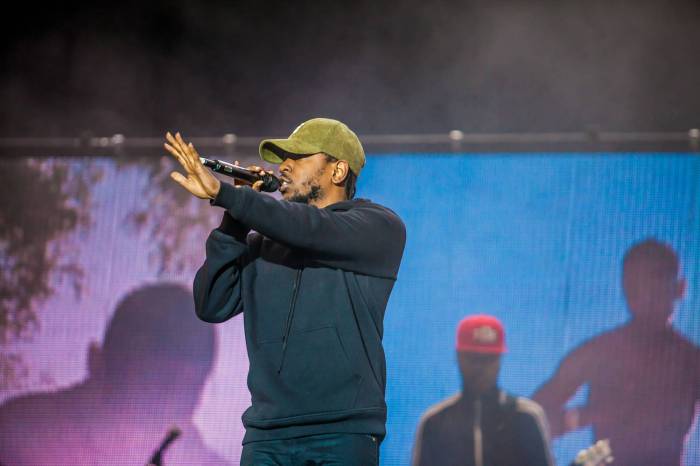 My list of musicians I’m dying to see is slowly but surely depleting, and along with the likes of Massive Attack, JAY Z and Linkin Park, Kendrick Lamar is (or was) very high up on it. Reading 2015 was a no-brainer, with most of the reason surrounding K.Dot’s widely anticipated Sunday night performance. And after being ultimately disappointed by Kanye West, blown away by Eminem and hypnotised by Nas, how would Kendrick Lamar’s performance pan out?

After a weekend of music, some good and some not, little-to-no sleep, a terrible diet and personal hygiene at an all time low, the last place I wanted Kendrick’s performance to fall on was a Sunday night sub-headlining slot. However, as soon as the crowd began to gather and my clock hit 7:59pm, all of the above was forgotten in an instant.

When those hypnotic Money Trees synths began, Kendrick vocally sauntered along with them, ya bish-ing along the way with a mellow murmur, but as you can see from the clip above, the punch comes at ‘I fucked Sherene’ in which the band kicks in, the lights beam on, and we’re finally well and truly underway. That bell-chiming hard hitter from Hit-Boy followed with the crowd manically chanting the ‘Martin had a dream’ s, with Kendrick classily posing the question of ‘who am I?’ before the crowd retorted with a venomous ‘Kendrick had a dream’.

Things cooled with one of my personal favourites- The Art of Peer Pressure, followed by a singalong-y Swimming Pools to which the friends of Kendrick fans among us began to jump on board. A huge reception to ASAP Rocky’s Fuckin’ Problems and Good Kid, Maad City’s Bitch Don’t Kill My Vibe were perfectly timed and in terms of song choice and order, I haven’t seen a better orchestrated set in a while. The ‘ya-ya-yas’ everybody was waiting for sucker punched us all following the midpoint rest, which, expertly milked and reworked was one of many highlights, even after the fourth or fifth time. I was so glad to see Sing About Me/I’m Dying Of First incorporated into Kendrick’s set, and the chilled vibes of the song, with the sun now set and the darkness descending, it was the perfect segway into To Pimp A Butterfly, with the massive reception to i as you might expect, Alright and King Kunta triumphantly brought Kendrick Lamar to the end of his set. A genius encore-come-finale with ADHD was the perfected icing, on the tastiest cake of 2015.

With a punching electric guitar and essential kicks from a full drum kit, the entire performance possessed unparalleled energy, that, complimented with Kendrick’s faultless stage presence and charisma, easily made me forget about Kanye West and his disappointing set at Glastonbury. It was such a professional and assured performance, that it was like I was watching the greatest rapper in the world. Oh wait..

One thought on “[LIVE REVIEW] Kendrick Lamar at Reading 2015”