When referring to drum and bass figurehead Andy C, the words legend, and pioneer come to mind. And on Thursday, the RAM Records founder continued to spearhead drum and bass, creating history within the genre, by selling out at the legendary Alexandra Palace in London. Bringing along fellow RAM talent Loadstar and DC Breaks, Andy C and MCs Tonn Piper and Dynamite MC, played to over 10,000 people at the sold out event.

Thanks to the most inconvenient tube strike, we arrived ten minutes into Andy C’s set; however, there’s nothing quite like the drum and bass atmosphere hitting you once it’s underway. Bottles of water and chewing gum draped across the crowd, the vibe of Ally Pally was absolutely electric. With the audience spanning those who snuck in using someone else’s ID, to esteemed drum and bass veterans who ‘have followed Andy since the start’, the aura of the night was phenomenal, with each and every person there to appreciate the enormity of the event, as well as the man himself. 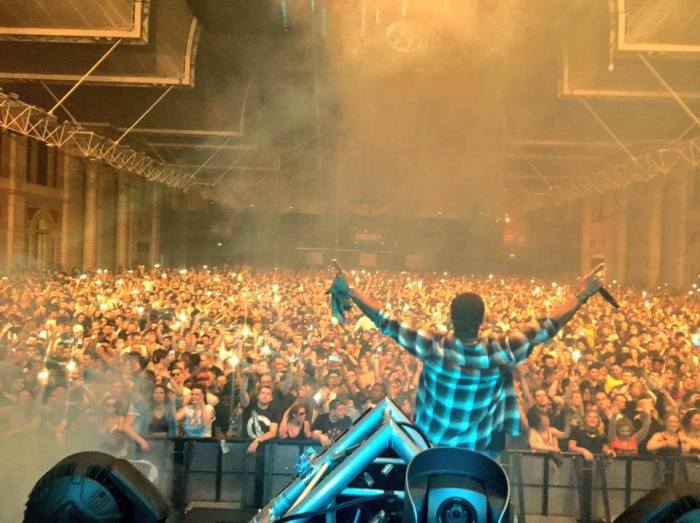 Speaking directly about Andy C and his performance, it’s simply impossible to fault the man. With a set spanning five hours, he trawled through every avenue of drum and bass, from jump-up, to ambient, breakbeat to jungle, liquid to the downright-dirty. The structure and composition of the set was again flawless, working progressively through the years that have continued to cement drum and bass as one of the essential British genres. The set was amass with irresistible drops, with trademark Andy C switch-ups exquisitely worked into the array of anthems played. Take Chase & Status’ Smash TV for example, whose renowned sirens and drum patterns give way to an stomach-busting drop, which Andy poetically swapped for a more vibey and rhythm-based substitute.

Throughout the set there were moments of nostalgic euphoria, with particular crowd-favourites Mr Happy, Bricks Don’t Roll and Blind Faith all slotting into the show with perfected execution. Shy FX’s Feelings, as well as Andy’s own remix of Major Lazer’s Get Free were notable high points of the set, with intoxicant-indused emotions getting the better of those around me, which dominoed across the crowd, ‘yeah-yeah-yeah-ing’ and ‘I just can’t believe-ing’ almost as loud as the Ally Pally sound system.

This brings me along to another faultless element of Andy C’s performance- the set design, light show and general production of the night, was one of the best I’ve ever seen. With only The Chemical Brothers’ renowned AV shows coming close, Andy’s stage featured a grand pyramid-like design, with ‘Andy C All Night’ hypnotically scrolling against an extravagant and clearly laboured-over light show.

Andy C brought his five-hour phenomena to an end at around 2:30am, and what will come as one of the most touching moments I’ve experienced in music, he came to the front of the stage and gave a short-but-sweet speech to the crowd. Despite alcohol, drugs and whatever else circulating continuously throughout the night, the entire venue paused in complete admiration and respect for one of the country’s most talented electronic figureheads, hanging onto every one of his humble and heartfelt words. It really was a special moment, and aside from the actual music, the genuine personality of Andy C really made an impression, and unmistakably moved the crowd.

Andy C, RAM Records, Alexandra Palace, and the entire production team need to take an incredible amount of credit for putting on hands-down one of the best electronic music shows I’ve ever seen. In terms of actual DJing/remixing/producing talent, Andy C is undoubtedly one of the greats, and a sold-out show at Alexandra Palace has quite literally made history, for not just himself and his record label, but for the good of drum and bass.