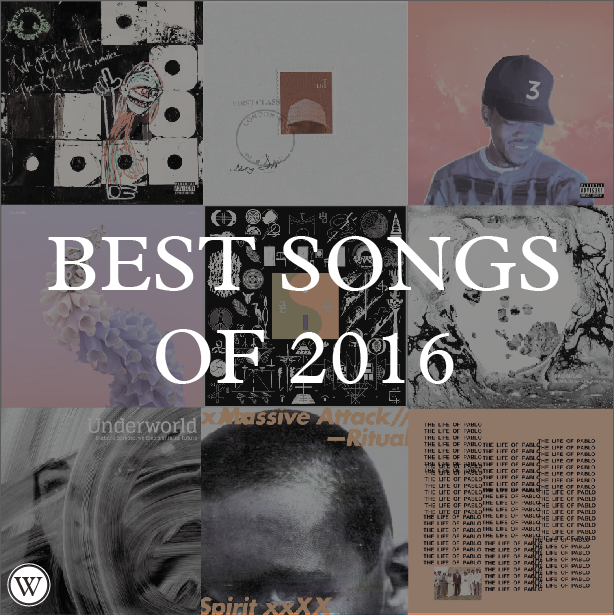 It’s that time of year again, the time for the music of 2016 to be rounded up into comprehensive lists. Spanning genres such as drum and bass and house, to rap and hip-hop, here is a 35-song list of the year’s best songs, some you will know, others you may not. Enjoy.

Nobody has had a year quite like Chance The Rapper, who has rightfully cemented himself of one of rap’s most important figures. On his outstanding new mixtape  Colouring Book, No Problem was one of the most memorable moments.

Massive Attack finally returned with long-awaited new material, and on their recently-released Ritual Spirit EP was the project’s highlight Voodoo In My Blood, a collaboration with experimental Scottish trio Young Fathers.

In a messy album that lacked direction and grasp, stood the Chris Brown-featuring, Chance The Rapper-written, and Kid Cudi-assisted Waves. An absolute behemoth of a track that lay dormant following the self-reflecting I Love Kanye skit, Waves suckerpunches you, catches you off guard, and fills you with an indescribable fire.

Underworld’s latest album featured some of their strongest material to date, and Nylong Strung shone as one of those highlights.

The xx‘s first single in 5 years was well and truly worth the wait. Jamie xx clearly has more influence in the band’s sound, and if their new album is a shade on this lead single, then we have a lot to look forward to.

An instant anthem, Conrad Tokyo reminded us all what rap was missing with the absence of A Tribe Called Quest, and collided it with one of modern day rap’s finest.

One of the standout tracks from Radiohead’s celebrated seventh studio album, Present Tense recalls the days of In Rainbows, the most lauded over album in the band’s discography.

Found on the recently released EP of the same name, The Spoils is one of the most beautiful songs of the year. Delicately constructed with hypnotic vocals from Hope Sandoval, a mesmerising film-score-like production, haunting piano and drum claps, and an equally impressive video to go with, The Spoils is one of Massive Attack’s strongest songs in their catalogue.

Undeniably one of Kanye West’s strongest pieces of music to date, despite being under a year old. As we now do with the likes of Jesus Walks and Runaway, in years to come we’ll look back on Ultralight Beam as one of the most groundbreaking songs of modern times.