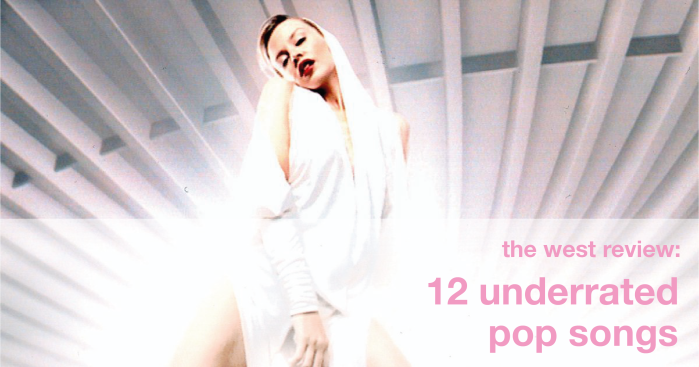 Back when the process of marketing a pop song was clear-cut and simple, without the distractions of hip-hop, electronic music or social media, we lucky noughties enthusiasts were dealt a never-ending conveyor belt of anthems, some forgotten, some slept-on, and some not given the credit they’re due today. Here we revisit some of pop music’s most underrated tracks, from Britney to Kylie, through to fresher-faced pop stars like Alessia Cara and Ed Sheeran.

In the midst of Britney-mania, surrounding highly publicised relationships and messy breakups with the likes of Justin Timberlake, Spears slowed things down for perhaps the most delicate and vulnerable moment in her career. The lullaby-recalling production and piercing vocal performances on Everytime slice through the air with chilling guilt and haunting beauty. The powerful high-budget music video further blurred the lines of how the song can be interpreted, with further connotations of love, drug abuse, fame, depression and motherhood.

Despite the glistening pop production and inch-perfect R&B arrangement, Shontelle’s T-Shirt is a massively underrated track, with a simple-yet-powerful metaphor at the centre of its genius. Post-breakup isolation, being alone with nothing but your thoughts and fresh insecurities, can legitimately make something as routine as getting dressed a challenge – ‘Nothin’ feels right when I’m not with you / Sick of this dress and these Jimmy Choos / Takin’ them off ’cause I feel a fool / Tryna dress up when I’m missin’ you’.

Pink is an undoubted rockstar, a queen of her craft. And it’s her connection to her fans that’s always given her an added degree of sincerity and passion. What’s more is that Pink has always stood for being yourself and continues to champion identity definition, and that’s what makes Fucking Perfect such a moving song – you feel every word as it’s sung to you – ‘if you ever, ever feel like you’re nothing, You’re fuckin’ perfect to me.’

Bruno Mars – When I Was Your Man
Release: 2013
Producer: The Smeezingtons
Album: Unorthodox Dukebox

As with anyone of Mars’ stature in the industry, Bruno undoubtedly has his haters. But wether he’s your guilty pleasure, absolute favourite, or someone you wish would just call it quits, Bruno does deliver a catalogue of stellar pop songs. Perhaps the pick of the bunch, is the isolated, piano-powered When I Was Your Man, a song filled with post-relationship ‘should have/could have’s, something we’ve most likely all experienced at one point.

My favourite Rihanna song by some margin, Take a Bow puts her relationship at centre-stage, comparing her breakdown and break up, with the act, performance and the production of the industry. The other side to the metaphorical strain of both music and love, is that Rihanna is undoubtedly the one with the power, the one making the decisions, nonchalantly shrugging off this relationship and moving on, just as if it were a performance to forget.

Back before Ed Sheeran was selling out arenas around the world, via 2011’s No.5 Collaborations Project, he was busy collaborating with the likes of Wiley, Devlin and JME. Also on the project was Little Lady ft Mikill Pane, a crushing, devastating story of prostitution and solicitation, teeming with vivid imagery and lyricism, crossed with delicate songwriting and moving vocal performances.

Think we all need a reminder about how a then-unknown girl band known as Girls Aloud, burst onto the pop music scene with a debut single powered by drum and bass. Sound of the Underground was like nothing the pop world had ever seen before, five squeaky-clean girls pumping pop vocals and big hooks into heavy-hitting DnB production, with Tarantino score-recalling guitars supercharging the track straight to number one.

You’d be forgiven for not following the career of Kate Nash post-Foundations. But the 2007 hit saw the worlds of pop, indie, and dare I say rap, collide for an off-kilter pop jam, about holding onto a relationship that’s way past its sell-by date. With Nash’s almost-venomous delivery, featuring labours and inflections over every vowel, every word, and every syllable, you feel her frustration, her enjoyment and also her loneliness at her withering relationship, and who knows how she manages to achieve that feat.

The sombre acoustic guitar and steady tempo, with chart-popping Nelly on the vocals, are nothing more than a veil to the depths and scale of I’m Like A Bird. Carefree, empowered, soaring, freedom, the imagery conveyed in the performance and songwriting of the track reflects the title perfectly. But the reality of the song is still brought back to earth with a thud, with lyrics like “Is your faith in me brings me to tears / Even after all these years / And it pains me so much to tell / That you don’t know me that well.”

Cowritten by John Legend, produced by will.i.am, and with a Kanye West feature, American Boy was born to be a breakthrough hit, for whichever singer was lucky to receive it. But UK-born Estelle made the off-funk/R&B hybrid track hers, with delicate vocals draped over the top of the silky smooth beat. And when people say ‘I miss the old Kanye’, THIS, THIS is the Kanye we all love and miss.

Kylie STILL doesn’t receive the credit and recognition for her contributions to pop music, and perhaps the most glaringly obvious example of this year, is 2001’s Can’t Get You Out of My Head. Sure, it’s one of the best-selling singles of all-time, yes it topped the charts in over 15 countries, and fair enough – it’s ranked as one of the best singles of the decade by NME, Rolling Stone and The Guardian, but with only 7million view on YouTube, it’s clear it’s being under-appreciated today. Put this on at a wedding and you’ve got your Mum and Nan front-and-centre of the dance floor, put this on in front of 30,000 ravers at Glastonbury, and you’ve got yourself a crowd ready to vibe.

Described by Cara as ‘the song [for] everyone who secretly hates parties’, Here capitalises on the pessimistic, snarling millennial who doesn’t want to socialise, doesn’t want to dance, doesn’t want to meet new people – and doesn’t want to be here at this party. Sampling the now-infamous Isaac Hayes track Portishead used for Glory Box, Here’s lyrics and content resonated with an entire breed of young people, with all-too-familiar imagery and songwriting, recalling those times when you just weren’t down to party, and what’s even wrong with that?