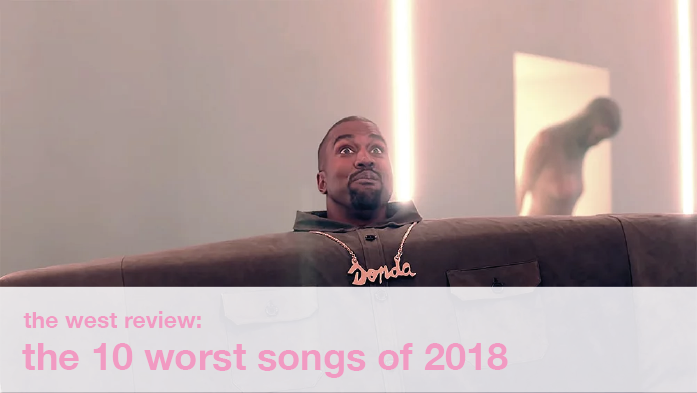 This year has once again been a stellar year for the music industry. 2018’s seen world-dominating releases from the likes of Drake and Ariana Grande, long-awaited projects from Kanye and Janelle Monae, and acclaimed albums from Travis Scott, IDLES and Cardi B to name a few.

But it’s not all smooth sailing, and with every cloud there’s a rusty lining, here we took at some of the year’s more forgettable moments – 2018’s 10 worst songs.

A beepy gym-ready beat from DJ Mustard, Chris Brown autotuned beyond belief with tired, eye-rolling lyrics, and another, yes another, one-dimensional rapper fronting the track. Throw in a music video with cameos from DJ Khaled and Kendall Jenner, and you really do have an example of everything wrong with pop music.

The whole Migos thing can be a good laugh in small doses. They’re clearly a trio of questionable ability and personality, masked by dollar bills and relentless ad-libs, but in this world we live in, you can see why they’re where they are. They can be mildly funny, have a genius marketing team behind them, and have a couple of hard-to-dislike tracks, ones that do fill dancefloors and create a buzz.

But for the exact same reason as Freaky Friday, Migos’ recycled sound is already to the point of exhaustion. The same beats, the same bars, the same lyrics, the same flow, the same ad-libs, the same producers, the same collaborators, when will the conveyor belt of monotony end? Here’s to hoping it stays in 2018.

Pitbull’s a smart guy, and there’s a reason he’s where he is – he doesn’t take himself very seriously. And with his litter of pop/hip-hop crossovers that have plagued our radios for years now, there’s always a dash of tongue and cheek to take the edge off. Give Me Everything with Afrojack and Ne-Yo, Timber with Kesha, Don’t Start The Party, they’re all love-to-hate pop songs, but one night on the town you may find yourself accidentally singing or dancing along.

But in 2018, Mr Worldwide thought it would be a good idea to collide the worlds of EDM, rap and pop once more, with a Toto Africa sample at the helm. And even now, the results were beyond what we’ve come to expect from Pitbull.

It’s long been debated just how much damage Eminem has inflicted on his legacy, after last year’s Revival and this year’s Kamikaze. And to be honest, it’s hard to say. But even after such seminal, groundbreaking, genre-defining releases in the 90’s and 00’s, just how many more horror shows can even the most loyal Stans take?

It’s impossible to call Eminem one of the most talented rappers in the world right now, his output and approach to hip-hop is so dated and beyond the realms of what’s expected in 2018, and Venom is one of many many examples of why.

Nonchalantly dethroned as the queen of hip-hop, and rightfully bettered in every single possible way by Cardi B, Nicki Minaj has had a year to forget. Her long-awaited fourth album, the erroneously titled Queen, was met with more of a whimper than a wave of acclaim. It missed out on the number one spot, with only one of the four singles even notching in within the top ten of the Billboard 100.

Majesty was a mess of R&B/pop/rap confusion, with both parties showing exactly why they’ve been left behind in 2018. Eminem sounds as confused as he’s ever done after a horror few years, and this travesty of a track is proof that we should start mourning what both Minaj and Em once were.

Justin Timberlake returned to the studio this year, with peculiar fifth album Man of The Woods. Championed by the respectable country/pop crossover lead single Say Something, but with The Neptunes and Timbaland on productional duties, the direction of Man of The Woods was already confusing to say the least.

Supplies saw the worlds of trap and country meet, something the world knew it didn’t need. A strange rap/sing-song flow, thrown over a choppy trap beat, later evolves into an acoustic-helmed mess of genres. We all thought better of you Justin.

‘I’m a sick fuck, I like a quick fuck’ and ‘you’re such a fucking hoe’ really do have to go down as some of the most ignorant lines in ,  music history.

Before its release, when rumours of a collaboration between Kanye and Lil Pump began to whirl, I’m not sure anyone could expect a track like I Love It to emerge. Moronic, crude, puerile, crass, vacuous, and above all things – downright bizarre, I Love It was almost beyond comprehension as a legitimate release.

Found within Fall Out Boy’s embarrassing seventh album MANIA, Sunshine Riptide is an absolute mess, and the worst of the bunch. A nightmarish four or five different genres are thrown together here, collided with a clang of recycled instrumentation and overproduced culture-crashing noise.

A combo of EDM, trap, rock and pop make up the basis of Sunshine Riptide, and Stump’s shrill dated vocals slicing through the song are enough to make the biggest FOB fans shudder and squirm. But when things surely cannot get any worse, Burna Boy stops by for a beyond-unnecessary mumble of a guest spot, with the track nosediving into something that may resemble dancehall.

Tracks like FRIENDS are exactly the reason why Marshmello is such a sniffed-at figure within the music industry. Beyond substance-less and lacking in any integrity, morality or talent, the track’s done-to-death acoustic to EDM make-up is only worsened by elements of trap and R&B thrown in for good measure.

In her defence, no vocalist in the world could have saved this car crash of a track, but Anne-Marie still does a fine job in making FRIENDS all the more unlistenable. Her berating, Caribbean-emulating vocal inflection she insists on singing with makes this collab a match made in hell, with both parties seeing just how many inspirations they can rip off together.

Lift Yourself is a joke, a joke we all should be laughing at Kanye for, not with. Not for one minute should we buy into this ‘Kanye’s playing us all’ shtick.

And perhaps what makes Lift Yourself all the more frustrating, is how the masses pander to Kanye and try and see the brilliance behind the bullshit, in calling the beat and the production some of his best this year.