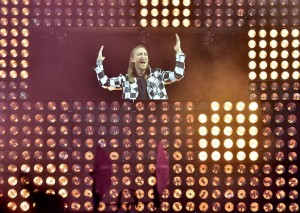 Today I was flicking through the music channels as you do during the adverts, and I came across Capital FM’s own music channel, in which they were showing David Guetta’s Summertime Ball ‘performance’. For starters, the audience that filled Wembley Stadium was almost entirely female and between the ages of twelve and no more than seventeen, therefore, an easy target for faking/miming/acting whatever you want to call it.

It didn’t even nearly look like he was mixing or making the music in any possible sense of the word, he wasn’t even trying to make it look like he was actually doing so. For starters, he barely, if ever, touched any of his ‘equipment’ that was hidden behind the front face of his little cubby-hole, for about 90% of the ‘performance’ he DIDN’T EVEN HAVE HEADPHONES ON- every now and again he remembered where he was, and that he was supposed to be mixing, and would place them ON TOP OF HIS HEAD as something of a token gesture. What’s more, not once did we ever get a shot from behind him, of his equipment, him using the equipment, or if there was in fact anything even in front of him for that matter.

Capital FM’s Summertime Ball has had previous controversy courtesy of actual musicians- Disclosure, who purposely left the ‘plug’ to their turntables in plain view on the stage. They said that they did this almost in protest, Capital expected them to ‘mime’ their set and use a backing track rather than crafting it there and then for the crowds. Well this is obviously exactly what Guetta’s just done, if you don’t believe how ridiculous his ‘performance’ was, have a peep at the video here.