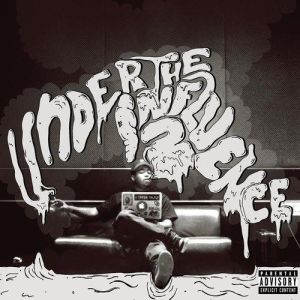 Domo Genesis, a tricky rapper to distinguish. On the one hand he’s the MC who outperformed Tyler, and possibly the rest of their posse across The OF Tape II with his verse on Sam Is Dead, on the other hand he’s the fat stoner who slots in behind Tyler, Frank, Earl and Hodgy in the pecking order, but seems more than happy to be placed in front of the remaining members. Under The Influence 2 is of course the sequel to his fairly well-received Under The Influence mixtape which was released back in 2011.

Finally finally finally, Domo Genesis is flexing is lyrical talent and showing us why he’s more than valuable within the OF camp. The beats on UTI2 are solid and his rhymes are as good as we’ve seen from mr-smoke-a-lot-of-pot. As an OF release, it’s a lot more mature than the satirical prior mixtapes, I for one was just frustrated with Rolling Papers for example, as it was plagued with skits and annoying intros/outros, when on the same disc is a gem in the form of Supermarket. But in contrast with Rolling Papers, UTI2 is filled with ‘proper’ rap songs- beats that leave a lot for the MC to accomplish, flawless flow, and quick-fire raps.

The difference between UTI2 and previous Domo Genesis releases is no more encapsulated by the above track- 24 Hour Spitness, which, along with This Is 15 Bars I May Be Wrong I Gotta See and X, finally illustrates what a fire MC Domo Genesis is. A reinvention of Drake’s Wu Tang Forever later, and I’m convinced that this is actually one of the strongest OF releases- the symphonic production to Follow Me, and perfected lyrics such as ‘Single parent home, half my life my pops incarcerated // I know that life can be a bitch there ain’t no harsher statement // But all the long time made the God as hard as pavements // Stand or fall I’m ready for the brawl involving large arrangements’ Domo Genesis’ Under The Influence 2 is as good a mixtape as I’ve heard in a while.

2 thoughts on “Domo Genesis – Under The Influence 2”